Welcome to our next InterWho (Whovian Interview)..
I had the pleasure of interviewing Leigh Bull so grab a cup of tea and enjoy the read ...
Allons-y! 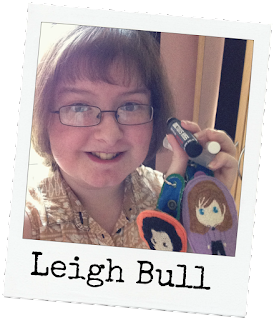 BBB: Please introduce yourself to our readers and tell us about yourself…
LB: Hi, I'm Leigh! I'm 22 years old and live in Wales - I've sadly never seen any Doctor Who scenes being filmed here, but I have heard that the coal pit and 'Global Chemical' scenes in the Jon Pertwee serial 'The Green Death' were filmed near my town, so that's my claim to fame :P I have a genetic disorder that causes me to have epileptic seizures, along with becoming easily exhausted from having hypermobile weak joints among other problems, so I'm currently unable to work or do much - but I like to fill my time with watching awesome shows like Doctor Who and drawing fanart of my favourite characters :)

BBB: When did you first become a Whovian?
LB: I first got into Doctor Who when it was brought back in 2005 with Christopher Eccleston - my parents suggested that we all watch it together as a family because they grew up watching the Classic series, and I've been hooked ever since!

BBB: What is your favorite Classic Who and/or New Who episode and why?
LB: Well, anyone who's talked to me can probably guess that I love the 1996 movie featuring Paul McGann, if that counts, even though it's not an 'episode'. I just love absolutely everything about it - Paul McGann is a fantastic Doctor, the Master is my favourite Doctor Who villain and I think Eric Roberts is amazing as him (and rocks the best outfit at the end!), Grace is a wonderful companion and it's a really interesting change to see the Master get a companion in the form of Chang Lee too (not to mention that Chang Lee is one of my favourite Doctor Who characters ever, he acts tough but has a heart of gold really and just wants to do the right thing. Oh, and he also gets the coolest 'first TARDIS entrance' out of anyone, just look at the way he confidently swings both doors open and then goes 'nope' when he sees what's inside :P) The TARDIS interior and costumes are stunning, and I think the whole movie looks fantastic for something that was made for TV in the 90's - I think the movie may have failed to be a hit because of how it tried too hard to please both British and American audiences, the old fans of the Classic series along with people who knew nothing about Doctor Who, but I still greatly enjoy it and think it bridges the gap between the Classic and New series very well :) Plus it introduced me to some of my favourite actors - all four main cast members are lovely people and I have become a massive fan of Eric Roberts' work since first discovering him in the Doctor Who movie, now having watched 35 of his many movies and various episodes of different TV shows that he's been in :P 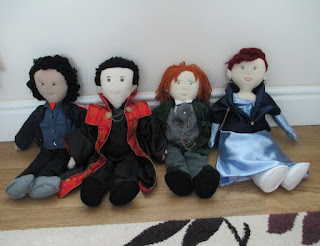 BBB: If you could meet just one Doctor Who cast or crew member, who would it be?
LB: Well, I'd ideally love to meet all four main cast members of the Doctor Who movie! I've already met Paul McGann and he was lovely, though I would like to meet him again because I got a bit 'starstruck' and couldn't talk properly when I saw him :P I've also met Daphne Ashbrook, who is an absolute sweetheart and all around wonderful human being (she's even called me her 'friend' on twitter!) I'm going to be seeing her again at a convention in May, along with hopefully getting to meet Yee Jee Tso there as well, I'm really excited about that - so that leaves Eric Roberts, I'd absolutely love for him to come to a UK convention so that I could meet him and discuss all the films he's been in, he's had such a long and interesting career that I'd love to learn more about (plus I've converted my nan into becoming a big Eric Roberts fan as well after watching a lot of his movies with her, so she'd love to see him too - come on Eric, get over here to the UK so your two biggest fans can meet you!) 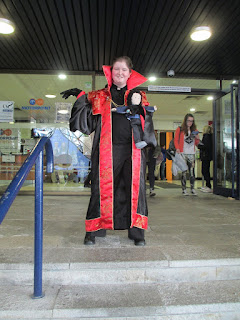 BBB: Who is your favorite Doctor and why?
LB: Probably the Sixth Doctor or the Eighth Doctor :) I'm one of the few who loves the Sixth Doctor's fashion sense lol, his multicoloured coat is awesome, and the confidence he has in himself is something I aspire to have :P I also love the Eighth Doctor's gorgeous Victorian era inspired outfit and childlike personality, with the sense of awe and wonder he feels at the smallest quirks about the human race that he loves so much really shining through and making him instantly lovable.

BBB: Who is your favorite companion and why?
LB: Awww, would it be cheating to say Chang Lee since he technically wasn't a companion to the Doctor for the majority of the film? :P If not him, then probably Grace. Her character introduction of being at the opera, running down the hospital hall in slow motion as the music still plays and then performing surgery while still wearing her dress makes for some fantastic and iconic imagery - she's beautiful and intelligent, being a talented cardiologist and even managing to reroute the TARDIS under extreme pressure by herself later on in the film, really living up to her nickname 'Amazing Grace'. I thought her romance with the Doctor was sweet, but I liked that she decided to leave him on her own terms at the end, even asking him to stay with her instead. I would have loved for the Eighth Doctor, Grace and Chang Lee to have stayed together and become a TARDIS team if the movie had gone on to be developed into a proper series, and it's a real shame that Grace and Lee don't seem to be allowed back now due to apparent rights issues, but I love that the Big Finish audios have still managed to bring Yee Jee Tso and Daphne Ashbrook back in the form of playing new characters Charlie Sato and Ruth Matheson in 'Tales From the Vault', 'Mastermind' and 'The Screaming Skull' (which are great audios, you should listen to them if you haven't already!)

BBB: If you could travel with The Doctor in his TARDIS to any time and/or place, where would you like to go?
LB: Honestly, I can't think of anything particularly enlightening that I'd want to do or see in the past, so I think I'd just like to go to 1977 America to watch Eric Roberts playing 'Ted Bancroft #1' in soap opera 'Another World' as it was his earliest TV acting role and no footage of it seems to exist today.

BBB: Are you in any other fandoms besides Doctor Who? Such as Torchwood or Sherlock?
LB: Hmm, not particularly - obviously I like other shows (such as, indeed, Sherlock) but not to the extent that I draw fanart or engage in any fan discussions, etc. with anyone about them. Unless there's an 'Eric Roberts fandom' that counts lol, because I really am quite invested in watching all his movies and following his career - I listen to a brilliant podcast that gives hilarious reviews of his movies, which can be found at 'ericrobertsistheman.com' or on twitter at '@ERITFM', and the great thing is that it never gets boring because of the massive range of vastly different movies that Eric Roberts has been in (for example, ERITFM's first episode reviewed his films 'Star 80' and 'First Dog' - suffice to say that they're very, very different movies :P) And they've even reviewed the Doctor Who movie, check it out! It's certainly interesting to hear it being reviewed from the perspective of people who don't know anything about Doctor Who (Warning that the website and podcast contains NSFW language, though, and the Doctor Who review starts about 40 minutes into the episode - also, they mentioned me at around the 50 minute mark when they asked what 'TARDIS' stood for!)
http://www.ericrobertsistheman.com/episode-7-rude-awakening-1989-doctor-who-1996/ 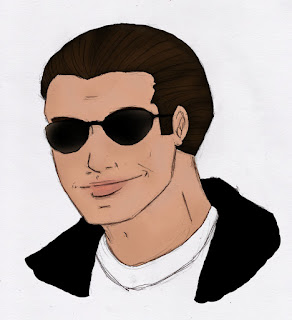 BBB: Tell us about your business or hobbies even if they are not related to Doctor Who..
LB: I can't engage in many particularly active hobbies due to my disabilities, but I enjoy going to conventions to meet my favourite actors and using those opportunities to dress up in the amazing cosplay outfits that my nan and mam make of the characters I like (my favourite being an absolutely gorgeous replica my nan made of the red cloak outfit that Eric Roberts' version of the Master wore at the end of the Doctor Who movie - so far I've only worn it to one convention and I had such a fantastic response, especially since I was also carrying a lovely Chang Lee doll that my mam and nan also made, with various people asking to have photos with me and even saying that they 'loved' me! I'd like to wear that same outfit to the May convention when I meet Daphne Ashbrook and Yee Jee Tso, I'm hoping they'll like it) I also love to draw, as I previously mentioned, and tend to draw my favourite characters - I've even posted some of my art on twitter and had wonderful responses from Yee Jee Tso when I've shown him my pictures of Chang Lee, I'll have to draw a picture of him for his upcoming birthday too as a gift :P

BBB: Tell us your favorite product from Blue Box Balm..
LB: Aww, that's such a tough decision, I can't decide - I absolutely love all the ones I've bought, along with the samples you've sent me! But I do especially love the shimmer of 'Asian Child', I love taking it around in my Chang Lee 'Balm Buddy', and I am biased with him being my favourite character :P

BBB: Is there anything you would like to add before we wrap up this interview (such as conventions you gone to, cast you have met, a collection you have, etc)?
LB: Not that I can think of, I think I've mentioned everything - thank you so much for interviewing me, I feel honoured that you wanted to and I've had a lot of fun answering these questions! Your products are amazing and I can't wait to try out more of them :)

**I wanted to show you some illustrations Leigh did featuring Grace & Chang Lee with a Blue Box Balm flair! 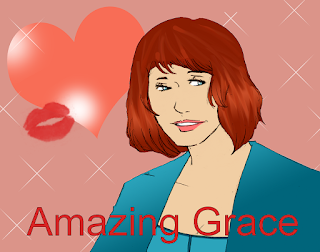 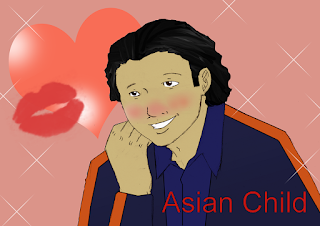 Big THANK YOU to Leigh for participating in our whovian interviews!

If you have any questions for Leigh please comment below..