I had the privilege of interviewing Andrew (The Doctor from Dark Journey), Dark Journey is an audio drama that can be found at AM Audio Media

Before we begin, we would like to take a moment to send out CONGRATULATIONS to the Dark Journey Team for being nominated for 12 Audio Verse Awards! Nominations include Andrew Chalmers for Best Writing, way to go Andrew and the entire cast and crew!! 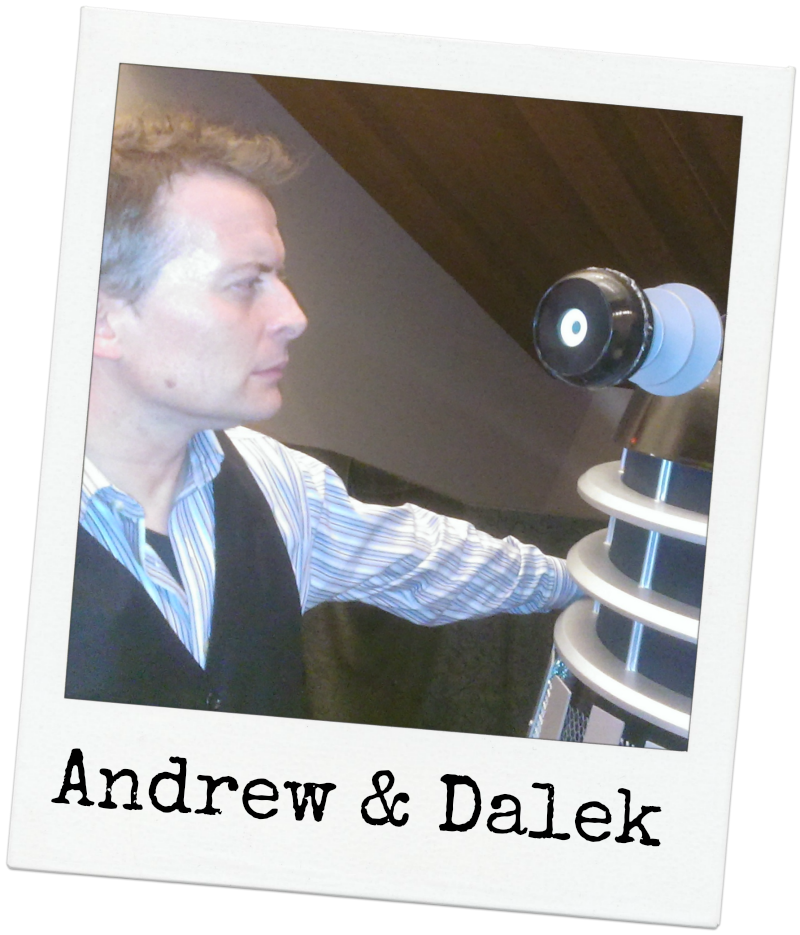 BBB: Hello Andrew, please introduce yourself to our readers and tell us about yourself...
AC: I have a very Scottish name...Andrew Frazer James Chalmers...which is great as coincidentally I am Scottish. To me, writing begins as a passionate love story full of imagination and fire then turns into a long term marriage where you realize your mutual shortcomings, take each other for granted but still love one another anyway!

BBB: When did you first become a Whovian?
AC: My parents were moving house and I ran into ‘our’ new place (well, it was ‘their’ house really as I wasn't paying the mortgage) and perched myself on a box to watch Jon Pertwee. I couldn’t believe that he was helping us move in, it must have been between series 9 and 10 and he was desperate for the cash. It wasn’t unusual in those days for BBC stars to help their audience’s out. It was nothing to see the cast of ‘Dad’s Army’ clearing out the drains or the nice people from ‘Are you being Served’ doing a shift at the local fruit and veg markets. It’s not the same with these day’s youngsters. I tried to get the cast of ‘The Big Bang’ to unblock my toilet and they told me where to go.
Anyway, there I was watching Jon being ‘The Doctor’ and loving it. It was like watching a movie as I was inches from the bloody screen. My Dad used to warn me that my eye sight would suffer as I was too close to the 'telly' but I didn't hear him as my hearing had gone because I was too close to the 'telly'. In hindsight I couldn't really see him either as my eyes had gone from being too close to the 'telly'. There’s a lesson there kids. Always listen to your invisible Dad’s. That line is probably more poignant to all of us than I originally intended. Hmmm…time for a…..

WRITING LESSON – Don’t wait for perfection. You’ll be waiting forever. Get it on the page ASAP and you’ll discover stuff you didn’t even know existed. Don’t think too much about ‘the writing’. A great line of dialogue only comes from  a big mess of words and misfires, so try and avoid thinking wherever possible. In my time as a writer I have tried to avoid thinking wherever possible.

BBB: You are involved in a very exciting online audio drama where you portray "The Doctor", can you tell us about Doctor Who Dark Journey?
AC: Doctor Who Dark Journey moves into 'edgier' Who territory without losing the heart of what the show is all about. The more I've written the more I've realized what makes the show tick which is very interesting indeed. I started out committed to creating a darker, more angst ridden Doctor but instead, was persuaded by a power tripping producer to come up with a catch phrase against my better judgement so my edgy, raw creation was described as "the hilarious 'Cool Beans' Doctor”.
Naturally, because of this ‘catchphrase’ I was thinking about being close to death so I became interested in creating a Doctor that was on his last life as I felt dramatically that it was great territory. I also decided on this as I couldn’t write the Tenth Doctor as well as RTD.
My wife Lynda describes me as a 'Bridge Doctor' meaning I my Doctor (in her esteemed words) is a "great bridge between the classic and the modern series".
This was a relief. I had suspected that I was the 'Bridge Doctor' as people had been walking all over me for years. All comedy is based on truth, suffering and huge banana peels.

BBB: You are also the writer for Dark Journey, can you tell us where you get your inspiration?
AC: I was terrified by the Bob Clark masterpiece ‘Murder by Decree’ as a nipper and introduced to Sherlock Holmes by my Mum who fancied Basil Rathbone (a brilliant Holmes btw…not my Mum…Basil I mean).
But my true inspiration for recording Dark Journey was my producer type buddy Michael Tamburro. I don’t have a brother (my parents gave me 2 middle names instead) but if I did it would be Mike. Let’s continue this fantasy and make him heir to the Swiss Chalet restaurant chain, the manager of Rush and the outgoing show runner for ‘Doctor Who’ who thinks I’m perfect for the job.
Sorry bro, no can do. I’m busy eating free chicken with Rush.
Great, now my brother hates me. Christmas is going to be tense again.
Anyway Mike (fueled by my old rejected scripts and pretty dodgy fast food) became the creative rocket behind Doctor Who - Dark Journey.
Here’s the excerpt, courtesy of TMZ.
“Hey ‘Chalmy’…let’s do one of your old scripts as an audio play!” (This was wise as I was told by a talent scout that I had the perfect face for radio).
“Sure ‘T-Bone’, anyone, but not the Doctor Who one”.
“Got ya. How about the Doctor Who one?”
“No”.
“You can be the Doctor?”
“Yes”.
So Mike was rocket captain and I was quite happy to go to space creatively as most of my writing has no atmosphere to begin with. My continuing inspiration for Dark Journey has to be blamed er…attributed to our fans and the wonderful people who support us.
Dark Journey has motored on and powerful, transformative inspiration has been supplied by people who we have never even met. What a powerful concept. It’s an honour to know such kind people.
Dan ‘The Writing Man’, Dr Squee and the ‘Droids’ you know who you are.
I am going to write more about ‘angels’ on the weekend when we release Episode 6 ‘The Legend of the Beast’. This is true but in reality I just wanted to be able to write “The Legend of the Beast’. That’s a boot shaking masterpiece of a title for our next episode ain’t it Bobby Sue! YEE-HAH!!!!!!!!!!!!!!!
Wow…it’s an awesome title though. What does it mean? “The Beast?” Who is that? Exactly.

BBB: What is your favorite Classic Who or New Who episode and why?
AC: Oooh….the classic question and it’s a toughie isn’t it? Here we go…
The Empty Child because it was like classic ‘Hinchcliffe’ Who but it was new series ‘Moffat’. How cool was that? Answer…very. I didn’t want to type that as it was obvious but I did. All comedy is based on internal conflict.
Classic episode? Robots of Death. My wife Lynda has a pair of oriental style short pants that she wears around the house and I call her D-84. Keeping with the ‘Robots of Death’ theme Lynda then tries to strangle me.

BBB: Series 8 is underway, with a brand new Doctor. What do you think of Peter Capaldi and the series so far?
AC: Series 8 is fantastic with a selection of adventures that are very impressive in range and attitude (the ending of Kill the Moon for example as well as Mummy on the Orient Express) However, at this stage, I would like to see the continuation of these questions and /or set up’s….
When is ‘the search for Gallifrey’ exactly?
What mistakes did the Doctor make and when is he going to start to do something about them?
Why has The Doctor never mentioned the fact that Clara effectively saved his life by chatting with a crack in a wall?
How does he know he has another set of regenerations? Why not just one more?
Why did he question ever being a ‘good man?’
Why does The Doctor’s hair vary in length between scenes? (see the ‘TARDIS in siege mode’ scene from Flatline).
Just my opinions. Love it all the same well except the hair, that’s just lazy continuity. You wouldn’t see anything like that on Dark Journey.

BBB: If you could meet just one Doctor Who cast or crew member, who would it be?
AC: Tom Baker. Sounds obvious, but it’s true. And as for the reasons?....well, do I really have to list them here peeps?

BBB: Who is your favorite Doctor and why?
AC: Please refer to the answer for Question 7. I’m lazy…..er…..but do it in a cartoon voice so it sounds different, witty and unique.

BBB: Who is your favorite companion and why?
AC: And the winner is….
Donna Noble because it wasn’t all about the new series romance (which by Series 4 had been done to death). Donna was a ‘mate’ and backed up by a brilliant back story with her Mum and Grandpa Cribbins. And the ending (well, the first proper one) was poignant and everything else you would expect. RTD at his best. I always think the new companions need an Earth back story. I think that’s why Clara is flourishing in Season 8. Yes, it’s basically Rose meets Mickey again but it works doesn’t it? To be fair, it was 8 years ago and these days people have short attention spans don’t they? I don’t. I always thought that the key to life was….oh…where’s my Time and the Rani DVD again?...yes, I do love strawberries…

BBB: If you could travel with The Doctor in his TARDIS to any time and/or place, where would you like to go?
AC: I would travel back to 1963 to witness the birth of Doctor Who, bribe BBC management with scones and become head writer. In the pilot I’d make the Doctor’s first companion Ian into Darth Vader and Susan into Mr Spock. Fandom would be united for ever! I would never see it though as on my attempted return to 2014, I had gotten lost and crashed in Roswell 1947. That’s a good question actually….how am I achieving this time travelling of yours ‘Miss Blue Box Balm’? Oh…a space ship? Cool. But wait..I didn’t invent a space ship time machine? Oh, one of your other interviewees did. Okay. I get it. Poor design though. I did get shot down after all. Thanks Mr Inventor….I’d be less concerned about dating Cleopatra and more concerned with putting shields on the bloody thing.

BBB: Is there anything you would like to add before we wrap up this interview (such as conventions you gone to, cast you have met, a collection you have, etc)?
AC: Well, we have a collection of very supportive and kind people who take an interest in Dark Journey which is fantastic, heartwarming and very encouraging. Thank you for being more additions to my collection (imagine me laughing in a maniacal way and moving wooden figures of you guys onto a chess board. That’s not a 5 Doctors reference just me on a Saturday night). 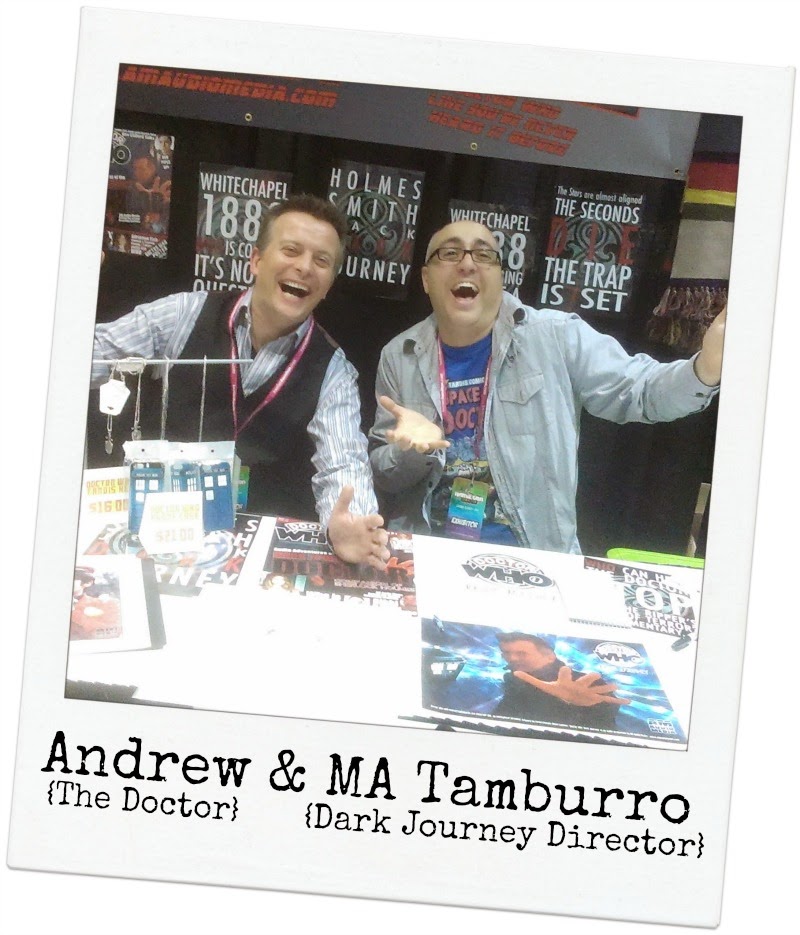 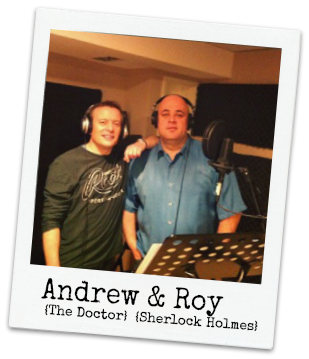 Blue Box Balm would like to say THANK YOU to Andrew for participating in our fun whovian interviews!
We would also like to extend our THANKS to Anthony from AM Audio Media for putting us in touch with Andrew. 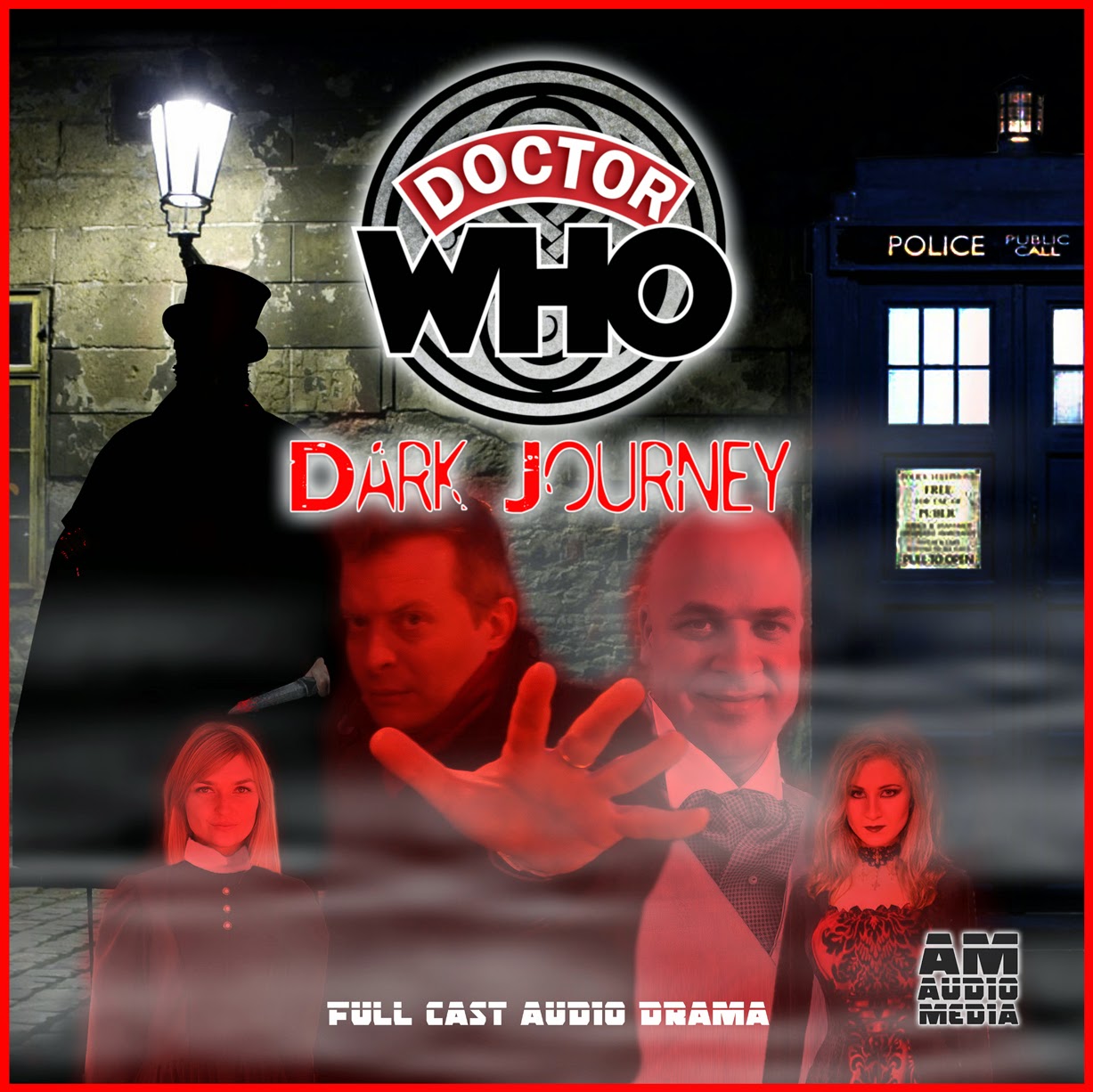 If you have any questions for Andrew, please comment here ...